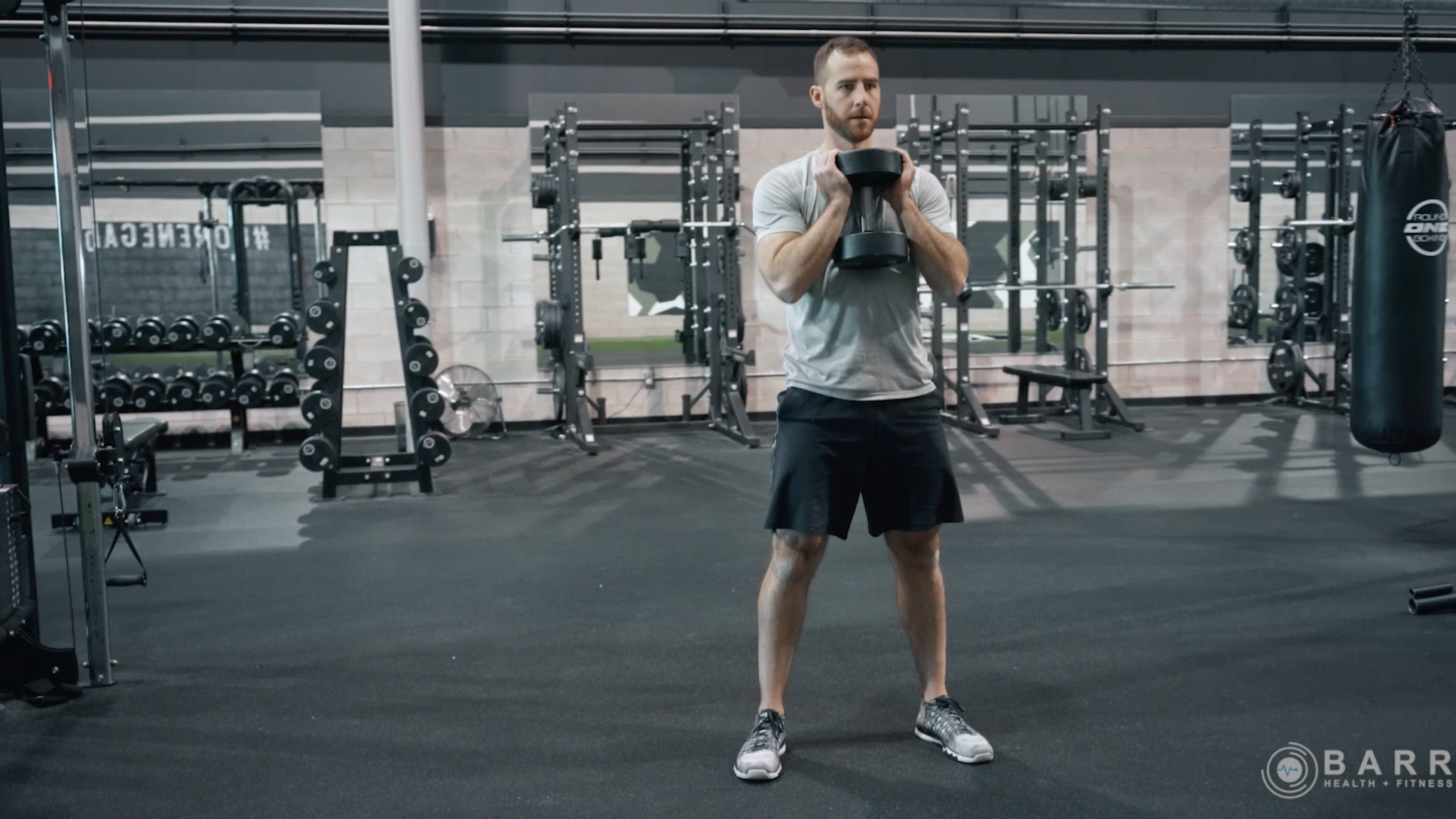 The goblet squat has many benefits. In today’s post, we’ll look at three of the more important benefits in detail to help you decide how goblet squats fit into your program.

Here is my Youtube video on this same subject if you’d rather watch than read:

One of the greatest benefits of the goblet squat is its value as a teaching tool. Simply put, it’s one of the best, if not the best squatting variation for a beginner to learn and become comfortable with squatting.

Believe it or not, a goblet squat is actually easier in a lot of ways than a body weight squat. Beginners have a tendency to lose their balance falling over backwards when they first try a body weight squat. The weight in the goblet squat provides a useful counterweight and helps keep you grounded and solid on your feet. Yes, there’s additional load, but even an untrained senior can usually do a few reps with a 10 or 20 lb dumbbell without much difficulty. Remember that a bodyweight squat is not squatting zero pounds. Your legs are lifting your body weight. Adding a 10 or 20 lb dumbbell is a fairly small percentage increase for most people.

Since new lifters generally tolerate the weight in the goblet squat quite well, and also benefit from the grounding effect of the additional load and counterweight, the goblet squat is the best way for a beginner to get started with squats.

Building Strength with the Goblet Squat

Once the pattern is in place and you have some confidence in the movement, it’s quite easy to increase weight. Many of my clients over the years have moved from a 10 lb dumbbell to a 50 or 60 lb dumbbell in just a few weeks. I like to push things as far as possible with the goblet squat before looking to progress to a barbell. Barbell squats are great, but they are technically complex and also put more stress on the spine and the body in general. This is not inherently bad, but it is something that we need to be aware of and manage.

How far you should push things with the goblet squat depends on the person. If there is no reason not too, I like to target a set of 10 reps with a 100 lb dumbbell before introducing barbell squats. However, there are many reasons why that might not be a good idea. For a smaller person, or someone with a wrist or forearm issue, lifting a dumbbell that size may not be safe or even possible, but the general principal of pushing things with the goblet squat as far as safely possible still applies.

Goblet Squat as a Regression

We’ve established that goblet squatting is useful as a starting point in your lifting career, but what about for more advanced lifters. Well, one way it can come in handy is as a regression. Let’s say someone has been squatting for a few years and is fully proficient in barbell variations of the squat. At some point this person may get injured and need to take some time off, and then gradually work their way back up to heavy barbell squatting. The goblet squat can be a useful tool for reintroducing load and the squatting pattern to help create a safe transition back to heavier squatting.

Another way that a goblet squat can fit into the program of a more advanced lifter is as a way of providing additional volume, with minimal additional systemic load. If we’re considering a more advanced lifter, whether they’re a bodybuilder or power lifter, or really anyone doing a lower body training session, they might structure a training day around squats, where their main lift of the day would be a few sets of heavy front or back squats. They would then probably do some other lower body movements, whether that’s lunges, good mornings, step ups or leg curls. In this scenario, the goblet squat can also be a great choice as an accessory lift.

A few sets of 10-20 reps after some other more intense lower body work is a great way to drive further adaptation in the lower body and get more practice in the movement, in a way that’s still fairly low intensity, and more transferrable to sport or other athletic tasks than some other movements. It is certainly worth considering the goblet squat as an accessory lift on a lower body focused session, at least at some point throughout the year.

The goblet squat is the best choice for a beginner to get started with squatting and is one of the foundational pieces of Strength Training Essentials and Strength at Home, two training programs I created specifically for beginners. Strength Training Essentials is designed to be done in a gym, and Strength at Home is for working out at home with minimal equipment. If you’ve never followed a training program before and want the knowledge you need to achieve real lasting success with strength training, these programs can put you on the right path. Get your copy today.