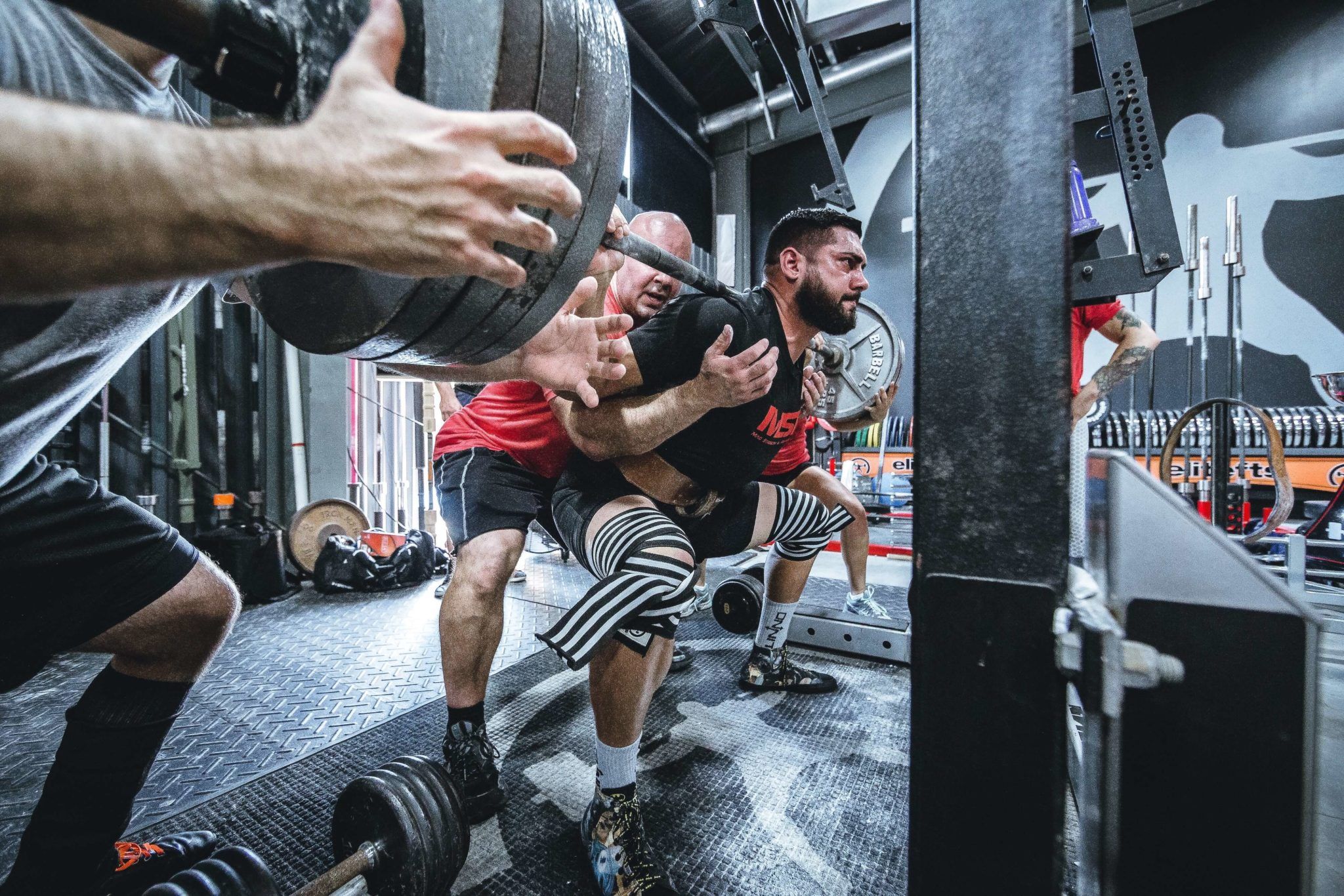 Should You Train to Failure?

Should you train to failure? It’s a topic of much debate online. While everyone is quick to share their opinion, there is a robust body of literature to guide our answers.

First, we need to define what failure is. There are two types of failure in strength training. The first is technique failure, where the lifter is no longer able to complete another repetition with what would be considered good technique and some sort of cheat mechanism is needed to complete the lift. The second type of failure is absolute or total failure, where the lifter has completely exhausted the target muscle group and can’t do another repetition, even with some sort of cheating.

Proponents of training to muscle failure tend to come from the bodybuilding world. These lifters cite the massive pumps they get from training to muscle failure and may cite their own success as evidence in support of the practice. If one follows a traditional bodybuilding style training program in which a muscle group is trained once per week, training to failure may be a worthwhile strategy. But there is strong evidence that completely taxing each muscle group once a week is not the best way to maximize muscle hypertrophy, or growth. More on this in a minute.

As with any training question, context must be considered. Whether or not failure is appropriate depends on the broader context of the lifter’s overall goals and the other activities that make up a microcycle. While we can’t consider all possible scenarios here, let’s examine whether the strategy of training to failure is appropriate for the goal of muscle hypertrophy, muscle strength, power, and for athletic performance.

Hypertrophy, or muscle growth, is likely the most sought after, and often elusive training adaptation. Failure has long been touted as the best strategy for creating muscle growth. The rationale is that the greater degree of muscle damage accumulated in exercises done to failure and the resulting recovery response leads to superior adaptations.
In the context of a single training session, this logic holds. However, research has shown that training to failure significantly increases the amount of time needed to fully recover from the training session. This increased recovery duration can impair the quality of subsequent training sessions, resulting in a decrease in training volume accumulated for the week. Total weekly training volume has been shown to be more important, if not perhaps the most important driver of muscle hypertrophy. So, muscle failure should not be sought to achieve hypertrophy as it compromises the lifter’s ability to accumulate total weekly training volume.

This is not to say that training to failure can never be used as a strategy. Assistance exercises such as lateral raises or leg curls don’t create the same systemic neuromuscular fatigue that squats and bench presses do. Outside of the target muscle, recovery from training an assistance exercise to failure should not compromise the lifters ability to follow their program in subsequent sessions throughout the week.

For more detailed information on weekly training volumes and the optimal strategies to train particular muscle groups, I highly recommend the work of Dr. Mike Israetel at Renaissance Periodization. He provides guidance on what rep schemes, training volumes and frequencies best develop each muscle, as the best strategies do vary throughout the body depending on a given muscle’s structure and function. I have enjoyed using his reps in reserve or RIR strategy, where the number of repetitions in a given set is prescribed based on the number of reps shy of failure the lifter is meant to achieve, with all sets being completed at 1-5 RIR.

Strength is a muscle or a system’s ability to produce or withstand forces. The greater the capacity to produce or absorb force, the stronger the system. Our focus in this section is reviewing the effect of training to failure in the context of a program strictly focused on strength, as one would see in powerlifting or competitive strong man.

When it comes to training for strength, the research is quite clear that failure should not be the priority. The same reasons as outlined above in the hypertrophy section apply, but a closer look at the neuromuscular aspects of training also provides insight.

Let’s consider an athlete training for strength. The goal is to lift more weight. Let’s say the target is to hit a 500 lb squat. Taking away all of the nuance of periodization and recovery, the way that athlete is going to do that is by progressively squatting larger weights. Progress is measured in successful lifts. We don’t often think about it in these terms, but a successful lift is the opposite of failure. If your objective is to increase the amount you can lift successfully, why would you practise failing?

If we view strength in a given movement as a skill, which it absolutely is, this begins to make more sense. Our progress develops in the same manner in which we train. If our training is full of missed or failed reps, we are not developing those skills.

Failure in heavy lifting poses safety and practical concerns as well. Unsuccessful reps in larger movements like a bench press or squat have the greatest injury potential. For a lifter to reach advanced levels, some missed reps are inevitable as they continue to challenge themselves in the pursuit of progress. However, deliberately seeking out failure in heavy lifts adds injury risk with no added training effect.

Could training to failure still be used in a strength athlete’s training program? It could be a tool but never a foundational piece. For example, training certain accessory lifts to failure during a more hypertrophy focused block might make sense in the larger context of the athlete’s training program. The point is that failure is not directly effective to increasing strength, and if strength is the focus of your program, failure should not be the goal.

“If you think you are only strong if you can lift a certain number, whatever that number is, you will feel pretty weak most of the time. Strength is not a data point; it’s not a number. It’s an attitude.”
-Pavel Tsatsouline

Here we examine the idea of training to failure when looking at the strength training portion of an athlete’s program whose primary focus is not the weight room, such as a basketball or a football player.

Training to failure rarely makes sense for team sport athletes. The increased soreness and extended recovery times do not only impact performance in the weight room, but on the field of play as well. Ensuring that a strength training program does not interfere with success in competition is one of the top responsibilities of a strength and conditioning coach. Deliberately extending recovery time by electing to train to failure is irresponsible.

Out of season, a failure condition could be used if it was identified that an athlete would benefit from building muscle before the next season. However, care would still need to be taken to ensure that the increased intensity of weight room sessions combined with sport practice wasn’t contributing to overtraining. Often times athletes are limited to two weight room sessions per week, even in the off-season, due to the other demands of their sport. In the specific example of being limited to twice weekly strength training sessions, and with a particular focus on hypertrophy, a failure condition could be appropriate for a team-sport athlete. It should be noted that it is still likely not necessary, and that the additional soreness and fatigue that accompanies failure training could diminish the athlete’s enthusiasm for the strength training element of their program.

I will be up front and state that failure training has no place in training exercises with a power focus. I’m unsure what that would even look like. A failed box jump is an injury. A failed med ball throw is … I don’t even know. Total failure in power training would actually be absurd. How many times would an athlete need to jump before they were completely unable to jump? The joint stress and metabolic stress on the working muscles would be unbearable.

Although it may be reasonable to train up to the point of technique failure, this should not be the way in which training loads are prescribed when training for power. In power training, skillful movement execution is critical. Training power exercises beyond the point of perfect technique doesn’t make sense due to motor learning principles. Bodies adapt and improve in the direction of the training stimulus. Athletes who jump and throw in a fatigued condition are more prone to maladaptive compensation patterns and make themselves vulnerable to injury. Additionally, they are in fact getting better at the skill of moving poorly. Effective power training is not conditioning, and all reps should be done with maximum intent and movement quality. Failure in this condition is not an option.

As an aside, the reasons outlined here also explain why the high-volume plyometric programs employed in popular bootcamp style workout classes are so problematic. Sure, this style of training does tick the standard general fitness boxes of getting your heart rate up and burning calories, but intensity can be achieved by other methods that don’t cause so much wear and tear and maladaptive movement patterns. If your training program consists of hundreds of jumps and burpees, it’s time for a new program.

Training to failure is an effective strategy for driving muscle hypertrophy when viewed in the context of a single exercise session. For a lifter following a “traditional” body building routine, training to failure works. However, the science in the weight room has evolved from the days of its body building origins, and we now know that the traditional split is not the optimal training method, regardless of the goal. Training to failure extends recovery time and most likely impairs the lifter’s ability to accumulate total weekly volume, the more effective driver of muscle hypertrophy.

This is not to say that training to failure must always be avoided. It can be used effectively in accessory movements, or at times when a given muscle group will not be trained for 72 hours. Some lifters may enjoy the feeling of going to failure and the pump they get from doing so. In these instances, failure training can be used intelligently.

Outside of the context of hypertrophy, failure training is at best unnecessary and at worst dangerous and counterproductive. Failure training should not be used when the goal is strength, power, or athletic development.

This topic is an example of where the online dialogue lags behind the evidence. Many lifters and coaches are firmly within the “every set must go to failure” camp. Although one certainly can make progress training this way, the research is clear that it is not the best or only way build size and strength.

Get our FREE Guide to Core Strength!

Thank you! You will receive my core training system shortly.